No Breaks! We Are Driving Through It… 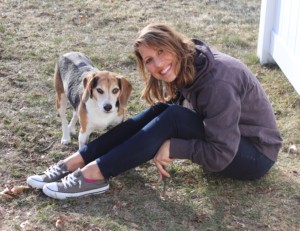 How do the sayings go?  “God doesn’t give you more than you can handle.”  “If he brings you to it, he will bring you through it.”  I try to stay steadfast relying on personal history and these overused sayings.  That doesn’t mean I don’t have moments yelling at God/Life/The Universe, “A break, even a short one, give me a BREAK!”  In the shower, that is where I do my best God shouting.

A beagle crisis is teaching me why the breaks ‘go out’ in the car of life.  We HAVE to drive through it.

During one of the busiest weeks of our business, our dog developed hellish pain.  Rupert the beagle has been with Cary and I since he was 5 ½ weeks old.  He came into our life at the same time it was becoming clear a human baby was not going to be possible for us.  Rupert is more human than dog.  Having him do his best to communicate his pain and our desperate attempts to figure out what was happening was excruciating.  I begged for a break.  Not this week of all weeks…not this dog of all dogs…not us again!

That night took a darker turn, Rupert was again not walking and his hind legs were showing signs of paralysis.  We rushed back to the animal hospital to get impossible news.  We were told his only hope was an expensive surgery that would have little chance to help him.  The vet decided it was best to leave him at the hospital to be monitored for signs of improvement.  Our assumption was that the she was offering us time to make the impossible decision to end the life of our 3-year old furry child who was completely conscious of his world despite being in terrible pain.

The next morning, we rationalized the decision and decided to not prolong his pain.  I called the hospital only to hear that Rupert HAD shown improvement.  The hospital insisted on continuing to monitor him.  Confusion set in and countless tears, we both felt helpless.  I again wanted a break from this unknown.

No break came because this crisis had to be driven through.  The rewards were on the other side of it.  Family stayed on top of us all day.  Calls were made to veterinarians on our behalf.  Offers to help pay for the surgery came in.  Our dog park owner begged us to stay positive.  It all came together like a light switch by 5 pm.  Cary was on the phone with the specialists 2 hours away at the same time I was back on the phone with the hospital where Rupert was showing even more improvement.  Our dog sitter dropped her plans to be there for our other beagle.  The 2 animal hospitals spoke to each other and all agreed that Rupert was an excellent candidate for the surgery.  We had a plan.  I could breathe again.

Since the surgery to remove pieces of an exploded disc off Rupert’s spine and nerve, we continue to be touched by grace at a level that restores my faith in humanity.  The truth is, as humans we need reminders of the goodness.  The outpouring of support is nothing short of miraculous.  The spirit of a dog is immeasurable, he continues to heal as if it’s no big deal.  He had feeling back in his legs the next morning after surgery.  His hind legs are getting stronger by the day, he’s walking again, and appears to be in little to no pain.

I’ve felt embarrassed as this dog reminds me about championing, rallying, and staying positive.  I mean, I’m a life coach after all, I get paid to find the positives.  We had all but given up on Rupert less than a week ago.  Why?  Because we are human.  We’ve lived enough years to know that crisis can turn to tragedy very quickly.  We’ve lived through enough tragedy to want to prepare ourselves for it.  To rationalize, to tell ourselves stories for survival.  It’s easier to prepare for the worst than to warrior for the positive.

I know this Rupert the Beagle Crisis was a life moment that had to be gone through fully to deliver the sweetest rewards and the best of life that have come to us on the other side.  The gifts of grace that appeared throughout the journey.  The best of Our People AND Cary and I have the Bestest People.  I’ve been given so much, loads more grace than tragedy.  I’m hoping this moment with Rupert will be the lesson that sticks to always remember that driving through the crisis is better than getting a break every … single … time.  I hope I can remember to trust that not all crisis leads to a tragedy.  I wonder if I will stop shouting in the shower for a break…