A Glorious Oneness of Humanity 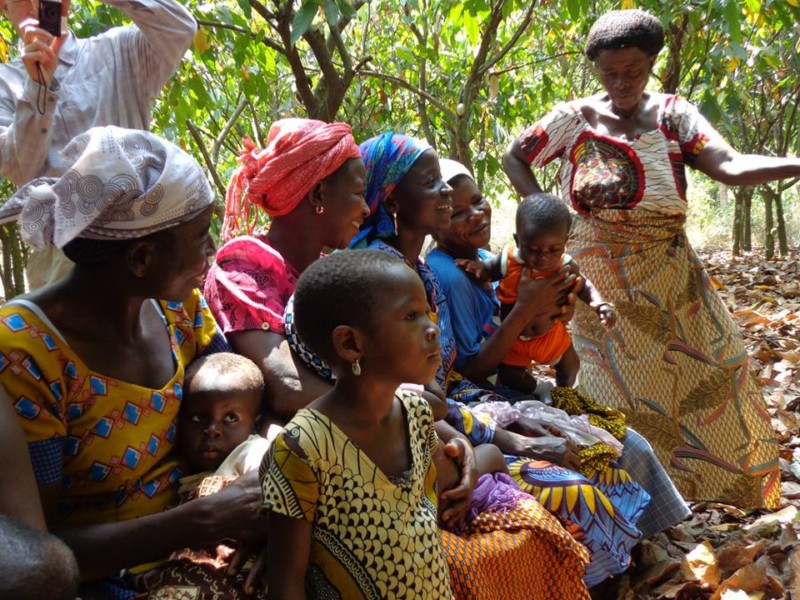 I recently gave a speech about women celebrating women. It had me thinking about a trip to Africa when I was working in the cocoa industry. We had gone into a village in Ghana where there wasn’t running water or a “luxury” as we in the western world define luxury. We spent hours riding in a caravan of SUVs along bumpy dirt roads. It was the dry season and the dust was thick but thankfully we weren’t pushing vehicles thru the muds of rainy season. Arriving at the village, we walked into the shade of the cocoa trees to find the families attending an agricultural meeting.

The presenter was in front of a 40 inch plus plasma screened monitor and the men were sitting up front. The woman and children were sitting behind the men but also listening intently. Questions were being asked and complaints made about plant hybrids and crop conditions.

After the formal meeting, we had a chance to sit with the women to discuss life in the village. What we found was familiarity.

One woman was the initial spokesperson. She was charismatic and funny. The men were gathering within ear shot and good-heartedly mocking her. Calling her “the talker” as the translator explained. An elder woman in her late 40’s, the average lifespan in Ghana is considerably shorter, spoke like a woman towards the end of her life. As she explained her previous dream to work as a housekeeper in Europe, she sparked the rest of the women to explain to us how different things were for them.

They told us they were expected to work all day in the cocoa fields and as women, they were still expected to do the majority of childcare, cooking, and cleaning. As the translator finished with, “Not like in America,” we burst into laughter. The women looked confused and we quickly asked the translator to explain that it was not as different in America as they believe. Not to pick on men, but we can all agree that a gender divide still exists. As the Ghanaian women received the translation, they started laughing too and we enjoyed a moment of female connection, understanding, and oneness.

One of the young women had dyed her hair blonde and her husband walked over to join her. As he made his way over, the other men inched closer. This young couple explained that they had traveled out of the village recently and were making plans to move into the city. The elder men now joined the conversation chiming in on the value of cocoa farming, staying in the village, or moving for better jobs. Not so different than conversations happening across the United States. Maybe not cocoa related but we certainly have been kicking up some political discourse around economic conditions geographically as of late. Fathers wanting their adult children to stay and farm yet not wanting to hold them back from prosperity. The risk when their children leave the village is that they may not see them again or meet their future grandchildren. We quickly felt the oneness of family and humanity.

We laughed, smiled warmly, shared head nods, and the kindest eye contact while the translator did his best to keep up. The discussion all ended with the whole group of over 20 of us fixated on the baby. He’s in red in the photo. He had thee biggest brown eyes and we all oohed over him hoping for a joyous baby smile.

On this Easter week as we eat our chocolate bunnies made possible by farmers like these Ghanaian Families. May we all remember that we share a glorious oneness of humanity.